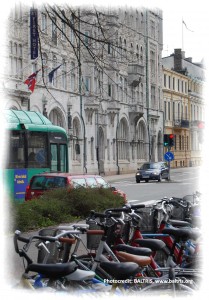 Kristianstad is district municipality scattered across 1300 square kilometers of prime agricultural land in southeast Sweden. The largest of its 25 communities has a population of 33,000. The smallest is home to 150.

In 1999, the elected representatives of the local authority took what for many of us would be an unimaginable decision - to become the first fossil-fuel-free municipality in the Western world. By 2008, just nine years later, Kristianstaad had cut its use of fossil fuels in half. Not only that, they are producing renewable energy that is being exported out of the municipality.

How? First and foremost is the local authority itself. Solid political leadership articulated and held the vision. Staff planning and co-ordination, engagement of citizens, partnership development - these constitute the backbone of the effort. However, municipally-owned energy and waste management companies are the brain, the arms, and the legs of the operation. Smart and profitable, they design and execute projects to realize the vision in partnership with the private and public sectors.

This is one of many dramatic, but doable examples of transition in The Resilience Imperative: Co-operative Transitions to a Steady-State Economy (New Society Publishers, 2012). Click here to purchase. 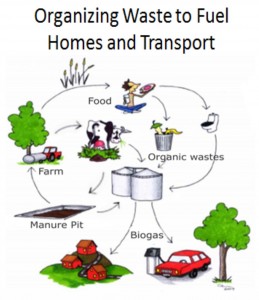 The range of scale, technologies, and energy feed stocks employed in Kristianstad is truly amazing. From wood chips to straw, from human manure to cow manure, from potato peelings left over from making Absolut Vodka to household organic waste - all have been carefully mixed and matched to create green energy across the region and beyond. Bio-Gas is one key product that flows from this waste stream. (See diagram, left.) Four million liters a year of vehicle fuel are produced, sufficient to fuel the entire municipal transportation fleet. Production is increasing annually. As a feedstock for power generation this waste stream also generates enough electricity for 4,000 average American homes. By 2018, 800 buses in southeast Sweden will be fueled by bio-gas alone.

Combined heat and power using waste energy and wood chips is another major energy source for district heating. Where the population is less dense, a range of wood- and straw-based fuels feed small clusters in mini-district heating systems or individual buildings. Combined district heating, small-scale heating, and biogas for transport yield an annual direct carbon reduction of about 140,000 tons.

This does not count the carbon saving that electricity production from bio-fuels creates. Also, the diversion of the waste to create new energy means that the methane from land-fills, waste treatment plants, and manure pits is being radically reduced. 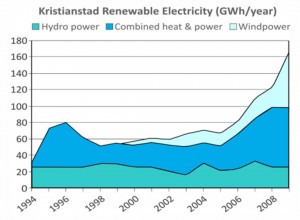 Beyond these initiatives, wind power is playing an increasing role. By 2008, electricity sufficient for 6,500 average American homes was being generated. But this is just the start. On-shore wind power installations now under way will have in place enough electricity for 50,000 homes. Future plans for off-shore wind are at the same level.

I have not tried to add up and figure out all the various impacts of these initiatives. There has been no comprehensive evaluation that I know of. But think about just the renewable energy production alone, enough to run 116,000 homes. There are only 77,000 people in all of Kristianstad for goodness sake. Think of the resilience being created in the region and the level of self-reliance being achieved.

And if you are a money guy, just talk to Lenart Erfors, the manager of Fossil-Fuel-Free Kristianstad about the money which householders and the municipal government are saving and the quick paybacks when they convert from oil. Think about the capacity and synergy that has been built through the municipal government and its subsidiary energy and waste management companies. They are making money, reducing carbon and constantly focussing their reinvestment within a framework that puts the public interest first.

Michael Lewis is Executive Director of the Canadian Centre for Community Renewal. He and Pat Conaty, a fellow of the new economics foundation, are the co-authors of The Resilience Imperative: Co-operative Transitions to a Steady-State Economy. Click here to download a content synopsis. In the photo, Michael (at left) and Pat pause while rambling in the hills of Wales.

i4 reports on the crafting of creative, democratic, & sustainable economies in a century of unprecedented challenge.